One of the oldest inhabited cities in the world. it survived the Crusades, Nebuchadnezzar, centuries of struggle and empires, but not modern war in 2016. This was always the price the Assad regime put on challenging its rule, going back to his father sacking Hama in 1982. 20,000 dead. And ancient city destroyed. And that’s when the Brotherhood just took over a few government buildings in a few cities.

My only response was tears, for a good five minutes. Thankfully, the good side of our nature is not diminished in any way by our worst. (I read that somewhere recently.)

I think history will record Obama and Kerry were played for fools with the ceasefire by the Russians. Assad was recently recorded laughing as his jeep drove through Daraya, a city his regime pummeled to the ground until it surrendered.

And, not for nothing, as a Sunni, this is visceral for me. (Of course, no one is more barbaric than the Saudis in Yemen as we speak, but that’s almost beside the point.) An ancient city, not dead, but populated, is about to no longer exist. 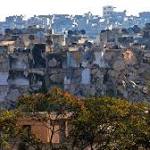 UN Syria Envoy Warns Aleppo Could Be ‘Destroyed’ This Year

GENEVA – The U.N. envoy for Syria called on militant fighters to leave Aleppo and for the Syrian and Russian governments to end their bombing campaign against rebel-held areas of the embattled Syrian city, warning that otherwise thousands of people …
Syria conflict: Eastern Aleppo faces ‘total ruin’ in two monthsBBC News

UN envoy offers to escort rebels out of AleppoReuters

I write about the dichotomies present in religion, gathered mostly from discussions with average Jews, Christians, Muslims and atheists.