On July 11th, I visited the Intrepid Air and Space Museum for the first time. I never visited before, but I had the occasion of a cousin visiting from Singapore with her husband and two children. Lo and behold!, the day before, a Star Trek exhibit opened up for only $10 added to the museum’s general admission ($25 for a stand-alone, if you’d like to go with out the rest of the museum experience). 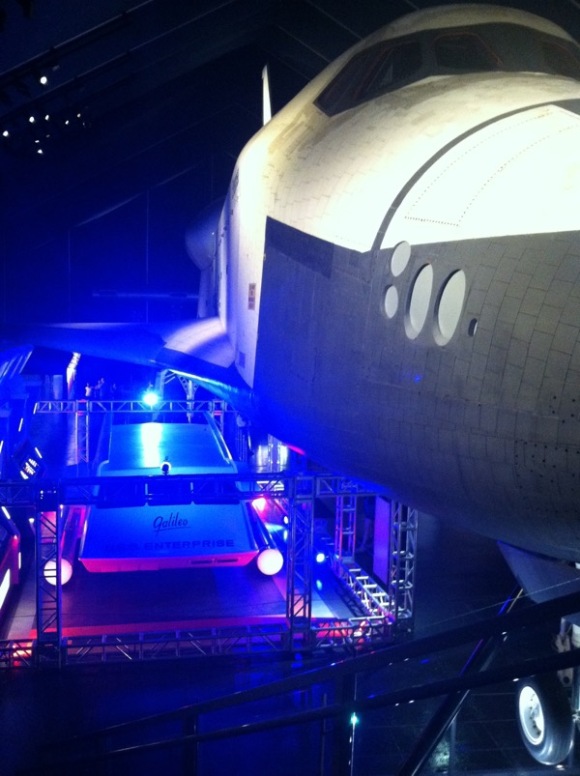 The most memorable part of the Star Trek exhibit was the original costumes featured on the show. From a dozen feet away, I instantly recognized Lieut. Cmdr. Data’s yellow tunic, the garb of my teenage idol. I was very charmed to see Patrick Stewart’s outfit from the episode “Q-pid” (TNG season 4), when Picard and the gang are transformed into Robin Hood and his merry men. (Everyone will remember Worf’s line: “Captain, I protest! I am not a merry man!”) A very impressive collection, as I assumed all this would have been auctioned off by now. 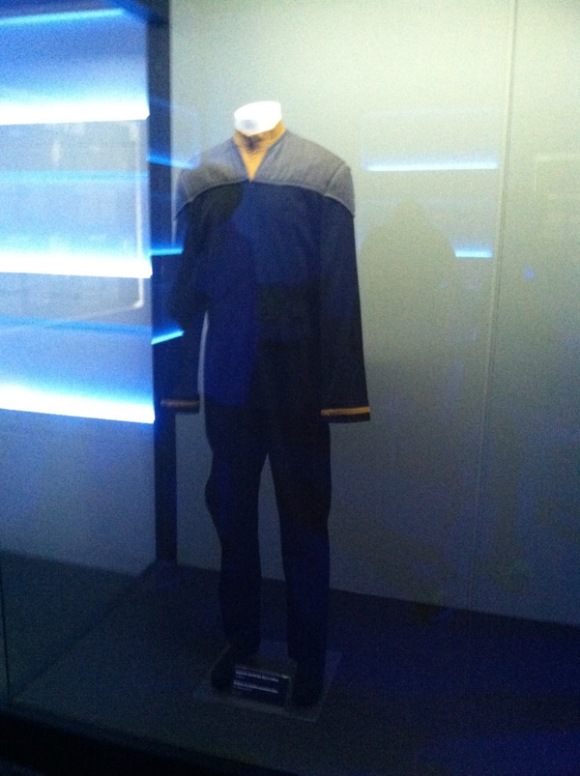 When you first walk in, you are given a wrist watch communicator which activates each console inside. In theory, this is cool, but when it came time to scan the Klingon mannequin on the biobed, the communicator didn’t register for the first dozen times I tried. 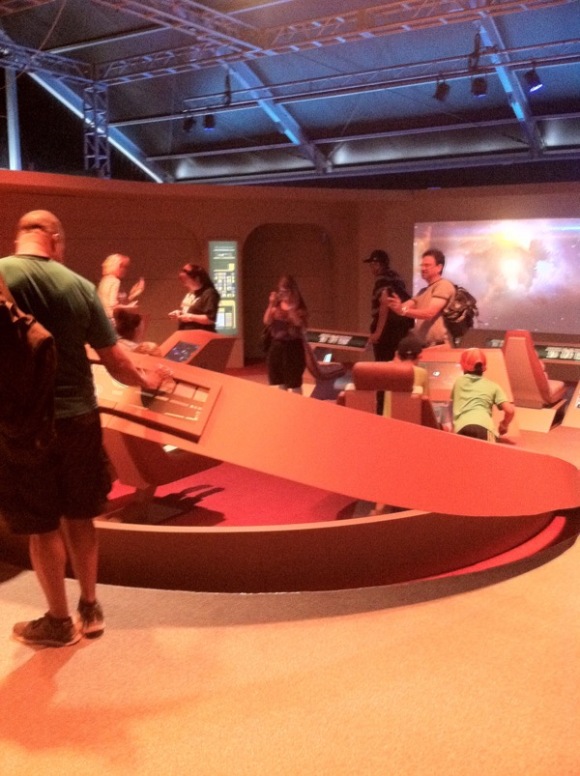 Technical glitches aside, the exhibit also had a full-size recreation of the Enterprise-D bridge; something I have not seen since Star Trek: The Experience in Las Vegas (which closed in 2008). There were also interactive consoles with brief video games, and the Galaxy-class bridge had such interactive displays embedded in most of the consoles. There was even a phaser target practice, like the gaming section of a toy store, but with nearly all games there was a long line, so I did not wait for all of them. 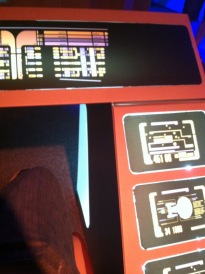 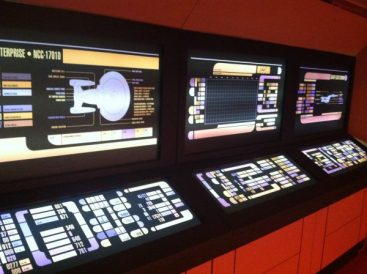 It’s cool though, I got to see what I wanted, and they aimed to please the Trekkie crowd by original props and a giant model of the Original Series’ Constitution-class Enterprise as soon as you walk in; but for me, the TNG bridge was the highlight, and I even sat in the Ops console where Data narrated facts and sensor readouts, and the Helm console that my character projects from. 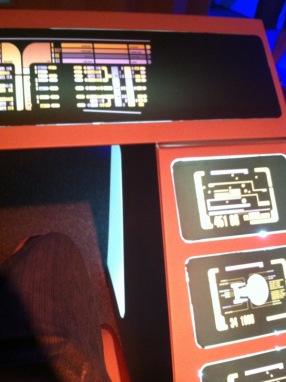 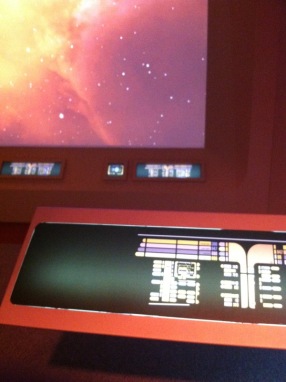 Well worth the 25 or 10 bucks. The museum mission was obviously released in time to promote the new movie, but it’s good we remember to pay homage to classics while CBS milks Gene Roddenberry’s vision for all it’s worth in the decades to come. 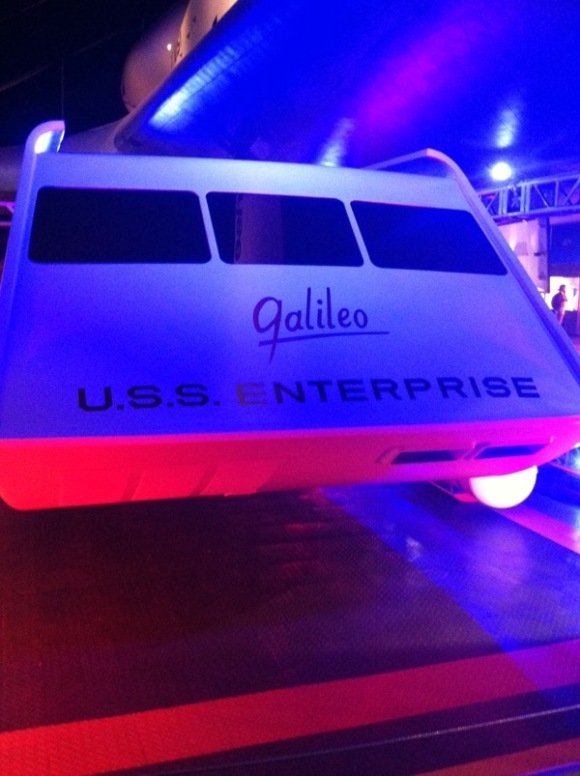 At the end, I got a certificate in my email, informing me of my scores and my graduation from Starfleet Academy. And attached was an MPEG video file showing showing me energizing from the transporter (YouTube); the footage from one of the exhibit’s sites. Great fun, and I am glad I added it to my aircraft carrier museum experience. 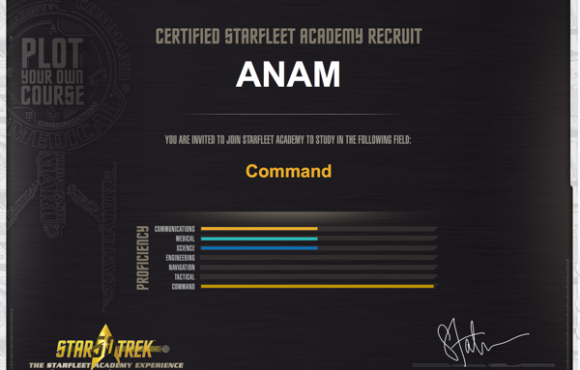 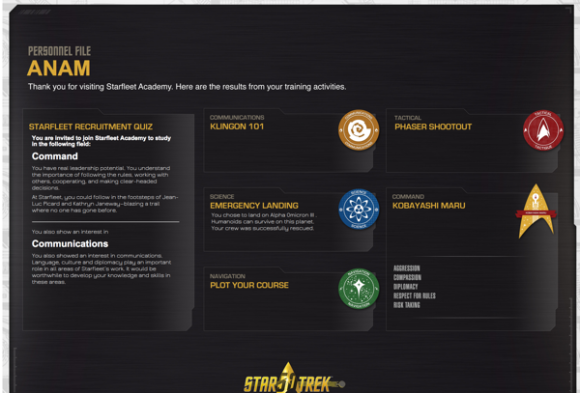 I write about the dichotomies present in religion, gathered mostly from discussions with average Jews, Christians, Muslims and atheists.